Puerto Branco has been blessed with its half-century experience in producing chicken and broiler chickens in Iran, and one of the largest active companies that have a major share in production, with the aim of improving the quality of its products and with the satisfaction of consumers of races full production in response to the country due to the experiences of the past years in the field of breeding different strains Leghorn includes Haysks ( Hisex ), DeKalb ( Dekalb ), Babcock ( Babcock ), Line ( Hyline ), Bones ( Bovans ) and Familiarity with their capabilities and shortcomings, in 2005, has introduced the LSL race from Germany. LSL race is the result of LOHMANN’s latest scientific researchIn order to improve the conversion coefficient, better durability, production, and high adaptation to Iran’s climate conditions, it has been introduced to the market with the aim of improving the coefficient of conversion, due to its genetic capacity and high production performance in a short time Thanks to the satisfaction of the poultry, a significant share of the Iranian egg production market. Nowadays Barekat Poultry Company, using its half-century of experience in breeding Leghorn herds and choosing the best, today announced its readiness to supply one-day-old laying hen and one-day-old chicken and a three-month LSL lolliput with a high quality. .

This breed has been able to produce from 415 to 420 eggs or 25 to 26 kg per chicken during 16 months of production, delivering all its rivals and bringing new records to the laying industry. . Comparison of LSL production with other breeds is shown in this chart: 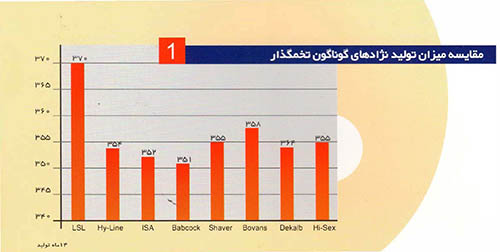 The conversion factor of the egg to the egg (or the amount of consumption to produce one kilogram of egg) in the laying hens LSL is equivalent to 2 to 1.2, which means that this breed compares with other races in exchange for an equal dose, The number of eggs produces more.
The following chart shows this comparison:

The LSL egg shell with a resistance of 40 Nm has a genetically highly resistant structure and, as it reduces the fracture and friable egg movement during the movement from source to destination, the amount of consumer product compared to other Races have a dramatic increase.
The percentage of egg lamb breakage in the LSL breed was 1-1.5% lower in production, collection and packing than in other races, which shows a significant advantage of LSL in having a good thickness and good rigidity of egg shell.

Blaket Production Company with a superior and productive breed LSL  and licensing of breeding since the year of 1389, introduced the ancestral race from German company Luhmann and the breeding of ancestors and production of herd-laying mothers. Nowadays, due to the facilities and equipment, it is possible to export the mother’s herds to the countries of the region. Is. Considering the special conditions for breeding these flocks, this unit was built in Qazvin province in a mountainous region with full consideration of health issues in this special geographical area.

The activity of this breeding group is the breeding of laying hens and the production of eggs for commercial breeding. This production group has an annual production potential of 15,000,000 million commercial commercial chickens. More than 30% of the total production of one-day-old chicks in the country. In this complex, two hatcheries are operating in Qazvin province in the MirPenchi area.

The activity of this breeding group is commercial breeding chicks, which, according to breeding conditions, is distributed after 90 days to egg producer units. In this group, an annual production of about 5 million pieces of pullet is being produced, partly distributed to egg production in affiliated companies, and the other part is sent to other producers in the country and exporting to the countries of the region for export.

In this group, an annual production of over 57,000 tons of eggs is produced, which holds market share as one of the largest egg producers in the country.

Production of broiler chickens one day